From the heart, about the heart

“from the heart about the heart”
Reproduced courtesy R.M Williams OUTBACK MAGAZINE(issue 55/ Oct/Nov 2007)

The author of Australia’s literary icon My Country was inspired by the harsh beauty of the New South Wales properties on which she spent much of her youth.

DOROTHEA Mackellar became a national figure after she wrote My Country, six verses of superb description, which became Australia’s best-loved and most-quoted poem because it so well portrays Australia’s inland. From the very beginning it was heralded as a literary icon and is still, because a century later its popularity has not diminished. In recent years just the opposite has happened, helped along by dedicated efforts to ensure that Dorothea and her words remain an integral part of Australia’s heritage.

In Anzac Park in the rural town of Gunnedah in the central west of New South Wales stands an impressive sculpture of Dorothea, sitting sidesaddle as was her habit, and looking intently in the direction of “Kurrumbede”, the property where she had holidayed as a young lady. And in the stately old Italianate-style courthouse, which is now a museum, in the tiny town of Paterson in the New South Wales Hunter Valley, a wall display has been devoted to a range of Mackellar memorabilia including a recording of Dorothea reciting the poem. Part of the display refers to another property, “Torryburn’, where she also spent considerable time in her youth.
Gunnedah and Paterson are rivals in a sense because there are people in both places who believe that their own district provided the inspiration for Dorothea to write My Country. Her father, Sir Charles Mackellar, an eminent physician and parliamentarian, owned both Kurrumbede and Torryburn and Dorothea visited both on many occasions.

Mikie Maas, a former deputy mayor of Gunnedah, believes that Kurrumbede was the setting because its location on the Namoi River plains with the Nandewar range in the distance was a background that identifies almost exactly with the words of the poem. She says that Alice Broun who lived next door, at “Coulston”, spoke in local interviews of her recollections of Dorothea’s visits and adds, “Alice vividly remembered how she often found Dorothea sitting on the woolshed roof dreaming away and pencilling some lines”.

Mikie maintains that “here are the sweeping plains with the ragged ranges and the wide brown land refers to the paddocks after they have been ploughed”. She adds, “droughts and flooding rains are typical in this area whereas Torryburn is a coastal, dairy catt1e property without sweeping plains and nary a drought”. Convinced that the connection with Gunnedah was valid, Mikie instigated the erection of the sculpture and inaugurated an annual poetry competition for schools as a memorial to Dorothea.

However, the weight of evidence, from the one person still alive who discussed the matter with Dorothea, suggests that it was the undulating fields and the low, rolling hills of the Paterson River valley surrounding Torryburn that provided the scene for her words. Or maybe it was a combination of both. Certainly, the people of Paterson feel as strongly about their case as Mikie does about Gunnedah’s, and to support it one of them, Val Anderson, the honorary curator of the museum there, has written a book – The Dorothea Mackellar My Country Paterson Valley Connection – together with Cameron Archer, principal of the C. B. Alexander Agricultural College, at nearby Tocal, and Cynthia Hunter, a local author and historian.

Mrs Anderson points out that two other district historians -the late Harry Boyle and Jack Sullivan – were concerned that their area’s link with Dorothea was in danger of being overlooked and possibly forgotten so they assembled their display, which was opened in 1996. Despite working as an illustrator in Newcastle while helping her husband, Bill, on their Paterson property, Mrs Anderson found time to research the association of Dorothea and Paterson beginning with Dr Mackellar’s purchase of Torryburn – 1,640 hectares with a comfortable brick homestead, cottages for the workers and a frontage to the Allyn River. This was in 1898, a time of” a lengthy drought of almost unprecedented severity” so much so that the local Aborigines moved away to the Barrington Tops in search of water.

Mrs Anderson adds, “These dry times are of particular significance for here My Country had its beginning. Dorothea Mackellar was 13 when her association with this region began. She wrote the famous poem in her teenage years inspired by wondrous natural events at Torryburn. Anyone who knows the area, and the poem, can visualise the scenes she witnessed. The drought broke while she was staying there in 1900”. She continues, “In recent times the relationship between Dorothea Mackellar, My Country and Torryburn was overlooked when another locality, where Charles Mackellar had property, sought to claim the association despite the fact that Dorothea herself verified events at Torryburn inspired her to write the poem.” Dorothea, herself, supports this. In an interview with the Newcastle Herald in 1964, she said, “I was on my parent’s property out of Maitland and, after the rain, I was on the veranda writing a long letter.

Such verification comes from Sister Adrienne Howley, a retired nurse who cared for Dorothea during the last 12 years of her life. Adrienne, who lives now, by co-incidence, in the village of Lorn, close to Paterson, confirms that this district was the basis of the words. In a prologue to Mrs Anderson’s book she writes, “Time spent there laid down impressions that can be found not only in My Country but in many of Dorothea’s later poems having to do with bush creatures, drought and flooding rain”. Adrienne is in her eighties now and is battling blindness, but her memory is sharp, and she is precise in her recollection of her discussions with Dorothea about the origins of My Country. She says, “Dorothea told me she wrote the poem while staying at Torryburn and said it reflected her feelings and experiences there”.

Adrienne expands on this in her biography of Dorothea, My Heart, My Country. Noting that Dorothea travelled extensively with her parents, she writes, “She was susceptible to the beauties of other countries, appreciating all that was different. However, it irked her to hear her home country compared with quite dissimilar areas of the world and disparaged for the differences”.

Adrienne’s own writing is expressive and colourful as illustrated in this assessment of Dorothea, “She loved words. She would string words together so they shimmered like necklaces of faceted gemstones”. And in recalling Dorothea’s own description of the rainless Torryburn, she writes, “Drought came to the area and the ground dried and opened like a crazy paving. All the grasses dried up and the leaves of the eucalyptus rattled, dust-covered, in the warm, dancing willy-willy. Day after day the skies remained a pitiless blue and the wind, when it came, blew the dusty topsoil into every corner and crevice. The creeks ran lower and lower until they no longer ran at all”.

She adds, “One morning there came a change … down poured the precious rain, at first in silver curtains, then stronger and heavier … kicking off her shoes, Dorothea ran out into the now pouring rain and danced for sheer joy and relief … Dorothea, several days later, glanced through the window and saw that the ground was no longer bare but overlaid by a delicate veil of green that seemed to thicken as she gazed”.

Dorothea Mackellar was born on July 1, 1885, at her family’s home that stands on Point Piper overlooking Rose Bay on Sydney Harbour. She was the third of four children, and the only daughter. She was tutored privately and although she later attended lectures at Sydney University she never formally enrolled as a student, but she was a naturally gifted linguist and spoke French, German, Italian and Spanish fluently.

Dorothea never married, but she continued to write, both poetry and novels, mainly about the Australian countryside which was, to her, a constant source of inspiration. Her work appeared in many of the better literary publications around the world such as the Spectator in London, Harper’s magazine in New York and The Bulletin in Australia, but none received the acclaim of My Country. When her health failed, she needed constant care and it was then that Adrienne Howley came into her life. Dorothea died, aged 82, in the Scottish Hospital in Paddington, Sydney, in 1968, two weeks after being awarded an OBE. She was the last of that branch of the Mackellar family, her three brothers having pre-deceased her leaving no heirs.

Her memory, however, lives on through the immortal words of her poem that was once – but rarely today – recited regularly in schools across the nation. Tamworth playwright Bill Gleeson wrote a musical about her and Moonbi artist Jean Isherwood “painted” the poem in the form of 32 watercolours. The “wide brown land” is at Berridale near Cooma, the “jewel sea” is offshore from Townsville and the “ragged mountain ranges” are depicted by the Flinders Ranges. The Isherwood originals are held in Gunnedah and a postcard series is sold at the local tourist information centre where manager Katie Ferguson says a steady stream of people visit a Mackellar display that may soon be relocated in an enlarged setting.

From time to time there have been moves to have the words form a national anthem. Just recently Annette Bando, of East St Kilda, wrote to the Melbourne Age urging that this be done.
“It waxes lyrical about our fair country and it scans beautifully to the tune of “Advance Australia Fair” she said.

At Torryburn today it is easy to relive the lines when looking across the McIntyre Creek and the Allyn River to the Paterson valley hills in the background. The Mackellar home has been enlarged extensively and today it is a stud, a magnificent property with manicured gardens and modern equine facilities which the owners, the Cornish family of Sydney, describe as “a leading, boutique broodmare farm”. It is home to hundreds of mares, foals and yearlings but there is, according to manager Leigh Priestley, the occasional inquiry about the past. And that is remembered by a wall plaque noting the link with Dorothea.

At Kurrumbede the main homestead – built of local stone, concrete block and slate with deep verandas – remains, although renovations have changed it significantly. The property is now owned by the Waugh family who bought it in 1950 from Arthur Sulman who, in turn, purchased it from the Mackellars in 1939. It is of similar area to that during the Mackellar’s occupancy and is still one of the largest holdings in the Gunnedah district.

Today’s most encompassing aspect of the legacy of Dorothea is the poetry competition. Dorothea herself might be embarrassed by all this attention because she was a most modest person. She had very little to say as the widespread adulation engulfed both author and poem. Finally, towards the end of her life, she said, “I have never professed to be a poet. I have just written from the heart, from experience. All I can say of My Country is that I wrote it with sincerity” 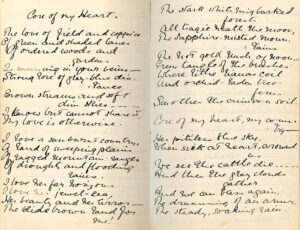